How to Fight a Red Light Camera Ticket in Texas 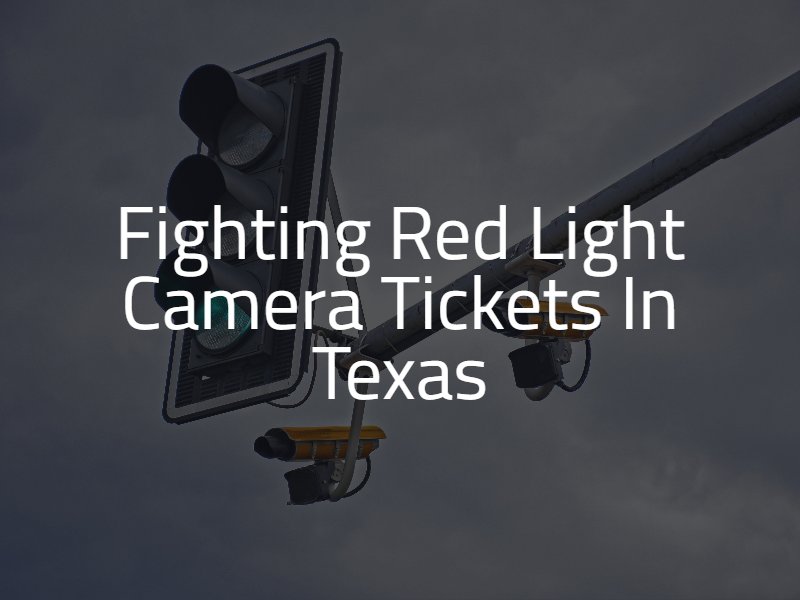 Running a red light in Texas typically leads to demerit points on the offending driver’s license as well as fines. The state relies heavily on traffic cameras to issue citations for red light violations, but these tickets aren’t always justified. What happens if you receive a red light camera ticket in Texas for an unwarranted citation?

Recently Arrested For Running a Red Light? Let our Defense Lawyers Fight for You!

A driver approaching a stop sign or red light that is either flashing or solid must come to a complete stop prior to entering the crosswalk or at a location designated by a traffic sign. Many streets will have “Stop Here on Red” signs that indicate where drivers must stop prior to entering intersections. These signs generally help improve the flow of traffic by offsetting stopped vehicles and allowing more room for vehicles to turn onto these streets.

Drivers generally have permission to make right turns on red lights, but only under certain conditions. For example, if the intersection displays a “No Turn on Red” sign for the right-turning lane, then drivers may not execute right-hand turns until they have a green light. Where allowed, a driver may execute a right-hand turn on red only after coming to a complete stop and checking to ensure the turning lane is clear and no opposing traffic is headed toward the driver’s destination lane. Left-hand turns on red are generally only legal when turning onto one-way streets.

Traffic cameras take photos of drivers who illegally run red lights and capture their license plate information. The state then issues citations to offending drivers’ registered addresses. A red light camera ticket is a civil offense with a maximum fine of $75 in Texas. It will not lead to any demerit points on a driver’s license. However, some jurisdictions place higher penalties on red light violations.

It is important to know the potential penalties for refusing to pay a justified red light camera ticket. An unpaid ticket may go to collections which then forwards the information to the Texas Department of Motor Vehicles. The Texas DMV can then issue a scofflaw hold on the offending driver’s vehicle registration that prevents the driver from renewing the registration until he or she pays off any owed fines for past traffic violations.

A driver who wishes to contest a red light camera ticket should hire a Houston traffic ticket attorney with knowledge of the appeals process to help. Fighting a ticket means confronting the traffic officer responsible for reviewing the relevant footage and signing off on the ticket. It will be necessary to prove that he or she did not accurately interpret the footage in question. If a driver can prove that he or she did not illegally run the red light, then it is possible to avoid the penalties for a red light camera ticket. However, due to the relatively low cost of the fines associated with these tickets, it is ultimately a personal choice to decide whether it is economically logical to fight a red light camera ticket.