MOEP and Protective Orders in Texas 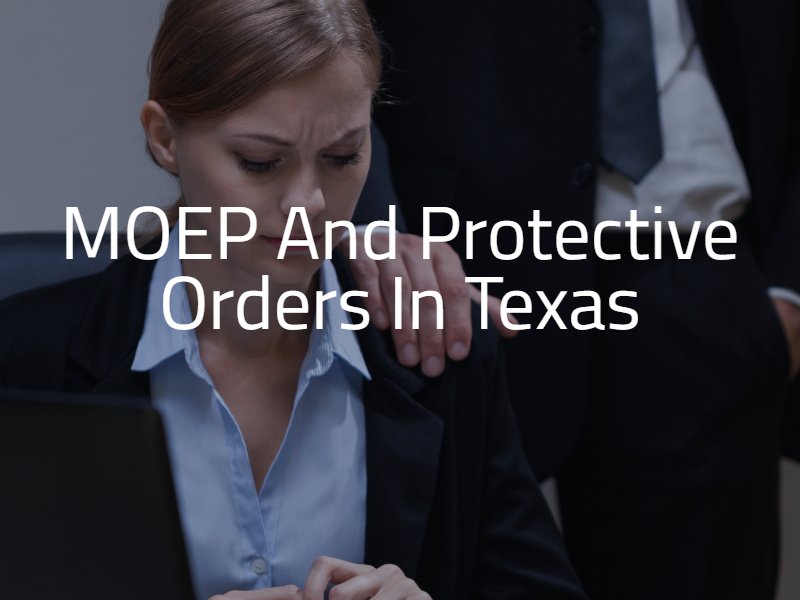 The justice system in Texas strives to prevent further harm to victims of violent crimes and protect their families as well. A Texas magistrate can issue a Magistrate’s Order of Emergency Protection (MOEP) to protect the victim and his or her family from an individual arrested for family violence, sexual abuse, aggravated sexual assault, stalking, or other threatening behaviors. A Texas magistrate can issue a discretionary MOEP before a defendant leaves custody for such offenses, but magistrates must issue MOEPs for offenses involving serious bodily harm, an assault with any deadly weapon or severe family violence.

If you have been arrested for family violence charges in Houston, contact the Law Offices of David A. Breston today.

What Does a MOEP Do?

A Texas MOEP will restrict the target of the order’s behavior in relation to his or her family. This may include prohibiting contact with the family, engaging in further harassment or abuse of the family or others, and committing further acts of family violence. The order may also function as a restraining order and forbid the subject of the order from being a certain distance from the family members, their home, schools, childcare facilities, or other family members’ homes.

A MOEP will also suspend the subject of the order’s concealed handgun license, if applicable. The order will also prohibit the subject from possessing firearms for the duration of the order. The only exception to this would be in the event that the offender is a full-time peace officer. A MOEP subject with a concealed handgun license and a registered firearm will have to surrender these items to the court to comply with the order.

The MOEP will clearly outline the findings related to the subject of the order and his or her criminal acts. For example, the MOEP may dictate that the findings against the defendant include a history of domestic violence including spousal abuse and child abuse. The order will outline the charges against the subject of the order and dictate appropriate action as well as list restricted actions. Following the previous example, the MOEP could state that the defendant must avoid specific locations such as the family’s home or their children’s school. In some cases, a defendant must wear a GPS monitor at all times to ensure compliance with the MOEP.

Since MOEPs exist to protect vulnerable families from potentially violent criminals, violating a MOEP entails strict penalties. The minimum punishment for violating a MOEP can be a fine as much as $4,000 and imprisonment for up to one year, or both. If a parent receives notice of a MOEP and violates it, the violation will reflect poorly on the parent in the future if he or she wishes to renegotiate child custody. If the subject of the order commits another crime during the course of violating the MOEP, he or she will face criminal charges for the act as well as the penalties for violating the order.

If you have received a MOEP it is absolutely essential that you abide by it, even if you believe you are innocent. Speak with a reliable criminal defense attorney in Houston about any options to appeal or modify the MOEP. If you have protection from a MOEP you can request a pseudonym form so your actual name will not appear in public records. If you have questions about your rights or restrictions under a MOEP in Texas, or you believe you need one for a violent or abusive family member, a qualified defense attorney is your best resource for more information.