What Is a No Refusal Weekend in Texas? 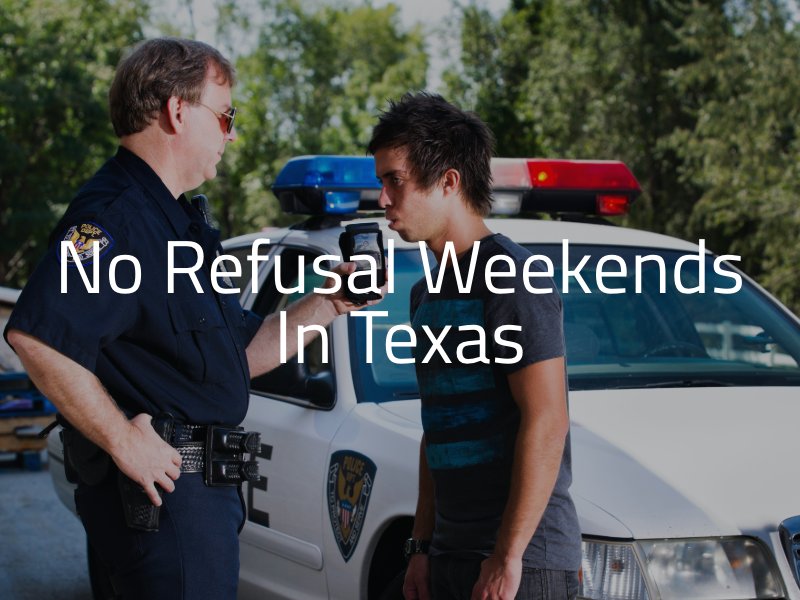 Texas has one of the highest death rates due to drunk driving of any state. While drivers get behind the wheel intoxicated throughout the year, some holidays and other major events tend to plead to more drunk drivers on the road. During these time periods, the state of Texas holds “No Refusal” weekends.

If you’ve recently been arrested for a drunk driving offense, contact a Houston DWI lawyer now and discuss your legal options.

You’ve likely heard of No Refusal through roadway signs, radio announcements, and news stories. These weekends are meant to discourage drivers from getting behind the wheel while intoxicated during high-risk times, reducing the number of DUI crashes during holidays and other high alcohol consumption periods.

When Do No Refusal Weekends Occur?

No refusal weekends mostly occur during holidays associated with high alcohol consumption, including:

Other times No Refusal weekends may occur include high-profile events, such as the Super Bowl. Drunk driving is a serious offense no matter the time of year, as it puts the driver and others at great risk. While you should always drive sober, it is especially critical to do so during No Refusal Weekends. Beyond protecting yourself from the enhanced enforcement of DUI/DWI laws, sober driving allows everyone on the roads to enjoy their holidays safely.

What is Implied Consent?

As with many other states, Texas works under a rule of implied consent for those driving under the influence. As driving is a privilege and not a right, the law states that drivers on Texas roads have automatically consented to any reasonable requests by officers for blood alcohol content (BAC) and other sobriety tests.

Even so, it is still possible for you to legally refuse a breathalyzer test. If you do so, the police officer will need to request a warrant to issue any BAC or drug testing. Such warrants are obtained by showing evidence to reasonably suspect that a driver is DUI, which often proceeds by describing driving activities or driver behavior while interacting with police. Drivers who are not under the influence have very little reason to not submit to roadside breathalyzer and sobriety tests, so it is in your best interest to comply with such requests.

If an officer obtains a warrant, the law requires you to submit to any BAC or drug testing. You may still refuse at this point, but you will face both license suspension and fines in addition to whatever punitive measures occur if you are past the legal BAC limit.

How Do No Refusal Weekends Work?

The terminology of No Refusal Weekends is somewhat misleading. Many people may interpret the name as meaning they cannot refuse an officer’s request to submit to BAC or drug testing. This is not the case.

What No Refusal means is that law enforcement takes steps to reduce the number of legal refusals of such tests. They accomplish this not by making it illegal to refuse to comply with BAC and drug testing, but by speeding up the process of obtaining warrants and conducting tests.

The intention is to both discourage individuals from driving drunk and to better handle the increased number of drunk drivers who will be on the road during high-risk periods.

With a warrant, a police officer may escort a driver to the office for additional breath and blood testing. In some cases, blood testing may even occur on site. The test results are evidence usable for the DUI/DWI case in court.

Without consent or a warrant, conducting a BAC or drug test violates the Fourth Amendment. If you have been subject to such a test, contact an attorney to help you protect your rights.