What Is Considered Indecent Exposure in Texas? 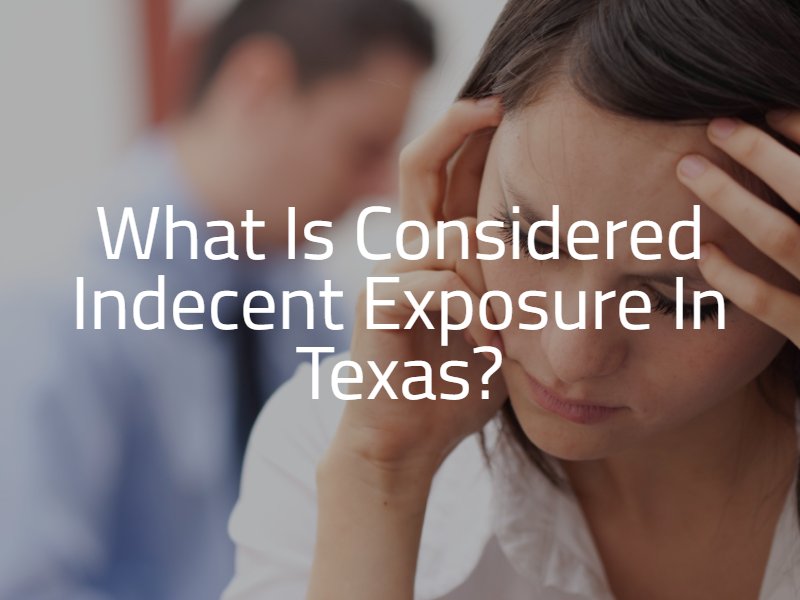 Indecent exposure may not be the most serious sex-related crime, but it is still a serious offense. In most cases, indecent exposure happens when a person exposes themselves for sexual gratification to another individual. Texas Penal Code 21.08 treats indecent exposure as having three main components:

Indecent exposure applies when the act stops at exposure. Any other form of sexual assault, which can include unwanted touching or forced intercourse, is a different offense and will have different consequences for the offender.

Texas Penal Code considers indecent exposure a Class B misdemeanor. The penalty cannot exceed a combination of up to 180 days in jail and/or a fine of $2,000. Convicted offenders may also face an additional term of probation. Despite its status as a misdemeanor, Texas prosecutors and courts take indecent exposure cases seriously and will work to prosecute proven offenders to the full extent of the law.

Additionally, indecent exposure can become a felony if it knowingly takes place in the presence of a child 16-years-old or younger. This crime is a third-degree felony and can be punished by up to 10 years jail time and/or a maximum fine of up to $10,000.

Indecent exposure differs from public lewdness, which involves any form of sexual contact or intercourse with another person in a public location where it is likely that someone else will see him or her and be offended or alarmed. Texas law considers public lewdness as a Class A misdemeanor with maximum jail time of one year and a fine of up to $4,000.

A judge will determine the sentence for an indecent exposure conviction based on the circumstances of the case. Repeat offenders are more likely to face harsher penalties for additional incidents, as opposed to someone who has only committed their first offense.

An entry into Texas’s sex offender registry lasts for life. It can also have life-altering effects when it comes to searching for a job, a place to live, obtaining certain licenses, and any other situation that requires a background check.

Because of the wording of Penal Code 21.08, there are several potential defenses for charges of indecent exposure. One of the most common involves the qualifying component of intent to arouse or gratify sexual desire. If someone has committed exposure without any such intent, then they would likely not face conviction if the prosecution could not prove the involvement of sexual gratification. An offender may also defend themselves by claiming they reasonably believed that no one would see him or her.

In addition, someone who is not of sound mind, as someone with a diagnosed mental illness, may not have the capacity to act with such intent. Intoxication at the time of exposure can also serve as a defense, although it is more likely to help reduce penalties rather than prevent conviction. Courts also consider the age of the offender, as children and minors are much less likely to have any intention of sexual gratification from exposure than an adult. If you are facing charges for indecent exposure, you will need the help of a skilled criminal defense attorney in Houston to represent you.