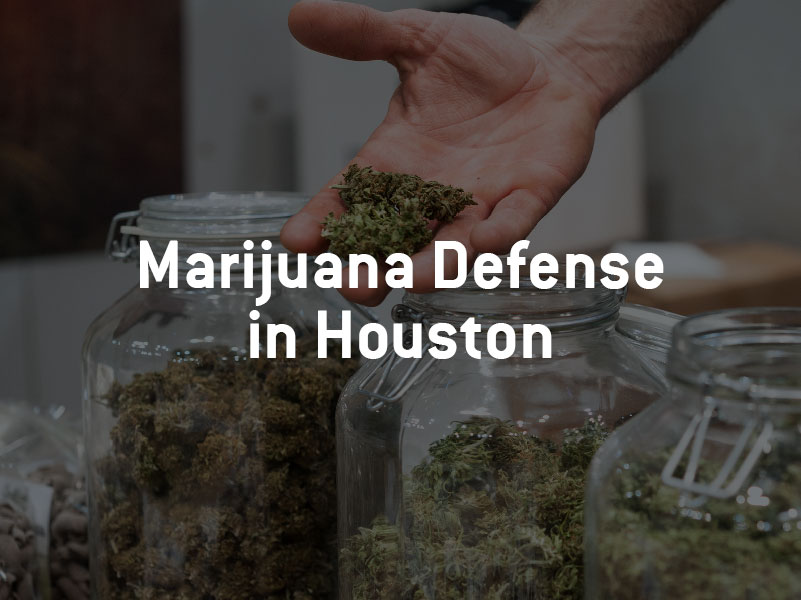 David A, Breston has been fighting for clients get their cases dropped or dismissed after being charged with marijuana possession for over 20 years in Texas. In spite of neighboring states passing laws to decriminalize petty marijuana offenses and permit the medical and recreational use of this substance, Texas remains stalwart in its severe marijuana-related policies. In Texas, even minor marijuana infractions can result in jail time and hefty fines. The consequences of these convictions could follow you for life.

Why Hire a Marijuana Defense Lawyer?

As of 2020, possessing two ounces or less of marijuana is a misdemeanor charge with 180 days incarceration and $2,000 in fines. Possessing four ounces to five pounds results in a felony charge, a mandatory minimum sentence of 180 days in jail, and $10,000 in fines. If charged with any marijuana-related crimes, come to The Law Offices of David A. Breston in Houston for aggressive legal representation.

David A. Breston has helped many Houstonians who have been charged with possession or distribution of marijuana. If you have been arrested on Marijuana charges in Texas, you will need a Houston criminal defense lawyer to represent you and stand by your side. The Law Offices of David A. Breston knows the ins and outs of the legal system and is fully prepared to represent you. We offer free and confidential initial consultations, call us today at (713) 224-4040.

As soon as an officer arrests you for marijuana-related crimes, contact our attorneys. You need to develop a plan moving forward to best protect your rights. The penalties for these crimes are severe, and escalate quickly depending on the type and amount of the substance discovered. For example, possession of less than one gram of hash or concentration (any amount) can result in two years in jail and $10,000 in fines. It is even illegal to possess marijuana for medicinal purposes in Texas. In our years of experience, there are a few available defenses we’ve used in marijuana-related cases:

Marijuana laws in Texas use very specific language to describe what is and is not legal. Skilled attorneys may be able to use this in a defendant’s favor to prove that the defendant’s conduct did not fulfill all provisions of the state’s laws. If the lawyer cannot convince the courts to drop the charges, he or she can at least strive to reduce penalties through a plea deal.

There have been a few documented cases in Texas of defendants successfully using the medical necessity defense. While possessing for medicinal purposes is still technically illegal in Texas, some courts may dismiss or reduce charges if you can prove you used the cannabis to ease symptoms of a serious medical condition or crippling pain. In 2008, a man named Tim Stevens was the first in history to win an acquittal based on the medical necessity defense in Texas. Stevens was HIV-positive and suffered from a related condition, cyclical vomiting syndrome. He found that smoking marijuana helped ease the pain from his conditions.

A defense expert from the Infectious Diseases Bureau gave testimony that detailed the success at treating Stevens’ conditions with marijuana. By preparing an extensive case about the medical benefits of marijuana, the defense won Stevens’ case and received an acquittal of all charges. Note that while this type of defense does have precedence in the Texas courtroom, it is rare and difficult to prove. Retaining the right defense attorney can significantly improve your chances during a criminal marijuana trial in Texas. For a free consultation with experienced lawyers in Houston, contact us.

Cannabis in the form of THC wax, hash oil, and concentrates has grown more popular around the U.S. Marijuana legalization in many states and the availability of vaporizers have increased the amount of these substances in both the legal and illegal cannabis markets. Under Section 481.116 of the Texas Controlled Substance Act, these are illegal substances in the state of Texas. The law allows no amount of THC wax, oil, or concentrate in your possession. You will need an aggressive defense attorney if police catch you in possession of these items.

What Penalty Group Does Marijuana Fall Under in Texas?

It is a state jail felony to “knowingly or intentionally possess a controlled substance” in Penalty Group 2. This penalty group consists of hallucinogenic substances and their salts and isomers, including tetrahydrocannabinol (THC) and “synthetic equivalents of the substances contained in the plant or the resinous extractives of cannabis.” The statute goes on to list other prohibited isomers with similar chemical makeups and their compounds. Breaking this law by possessing any amount of THC or its oils or derivatives is a felony.

You could face a state felony charge if police find you in possession of less than one gram of THC wax, oil, or concentrates in Texas; a third-degree felony charge for one to four grams; and a second-degree felony for four to 400 grams. Being found in possession of more than 400 grams is an extremely serious offense that could result in a life sentence (no more than 99 years) or minimum jail time of five years and a fine of up to $50,000. As you can see, possessing even the smallest amount of THC oil could result in a felony charge in Texas.

Texas Statute §401.002(26) describes what differentiates THC oil from marijuana in detail. This distinction is important to understand as a consumer, as the penalties for possessing THC oil are much more severe than typical marijuana. The law states that “marihuana” (legal spelling) consists of cannabis sativa L. plants, both growing and non-growing. Every type of derivative, mixture, compound, manufacture, or preparation of the plant or its seeds qualifies as marijuana in the state of Texas.

Outside of legal jargon, consumers might recognize THC oil or wax by its appearance. Cannabis oil, hash, or “dabs” generally come in thick, sticky substances that resemble resin. Cannabis oils and waxes contain higher concentrations of the active ingredient in marijuana – THC. Therefore, oils can be much more potent than traditional loose-leaf marijuana. This is why Texas lawmakers punish possession of THC oils and concentrates more severely.

Is Bringing THC Oils into Texas a Crime?

Yes. Just because you purchased THC oils or concentrates in states that have legalized these substances (such as California, Colorado, Nevada, Oregon, or Washington) does not mean you can bring it back to Texas.

Crossing the state line into Texas with cannabis oil in your possession could result in a felony charge. Contact a Houston defense attorney the moment you receive a criminal charge for possession of THC oil or concentrates in Texas. You need serious legal representation for this serious crime.

This law office was very kind to me during a very difficult time of my life. They helped me negotiate a great resolution to my case.